The proposed Garibaldi at Squamish Ski Resort is expected to be a year-round destination mountain resort about 15 km north of Squamish. The project will include 124 ski trails plus 21 lifts along with resort accommodation and commercial development. The project has been approved with about 40 conditions and it is estimated to take 20 years to complete once started.

In 2010 the BC Environment Assessment Office released a report which described that the project lacked information on potential effects on vegetation, fish and wildlife. This memo delves into an environmental assessment of the proposed ski development as well as some climate change implications for the project.

This assessment looks at three areas of environmental concern: Old Growth Management Areas (OGMA), Ungulate Winter Range (UWR) and Fish Habitat Riparian Zone (FHRZ). Streams above 555 m are given a FHRZ of 50 m and streams below 555 m are given a FHRZ of 100 m. Table 1 shows the percentage of area within the project boundary each of these sensitive areas covers. It has been found that ski resorts have negative effects on fauna reducing the abundance and diversity of birds, arthropods and mammals (Sato et al., 2014). The total area within the project boundary which is of environmental concern is 38%. 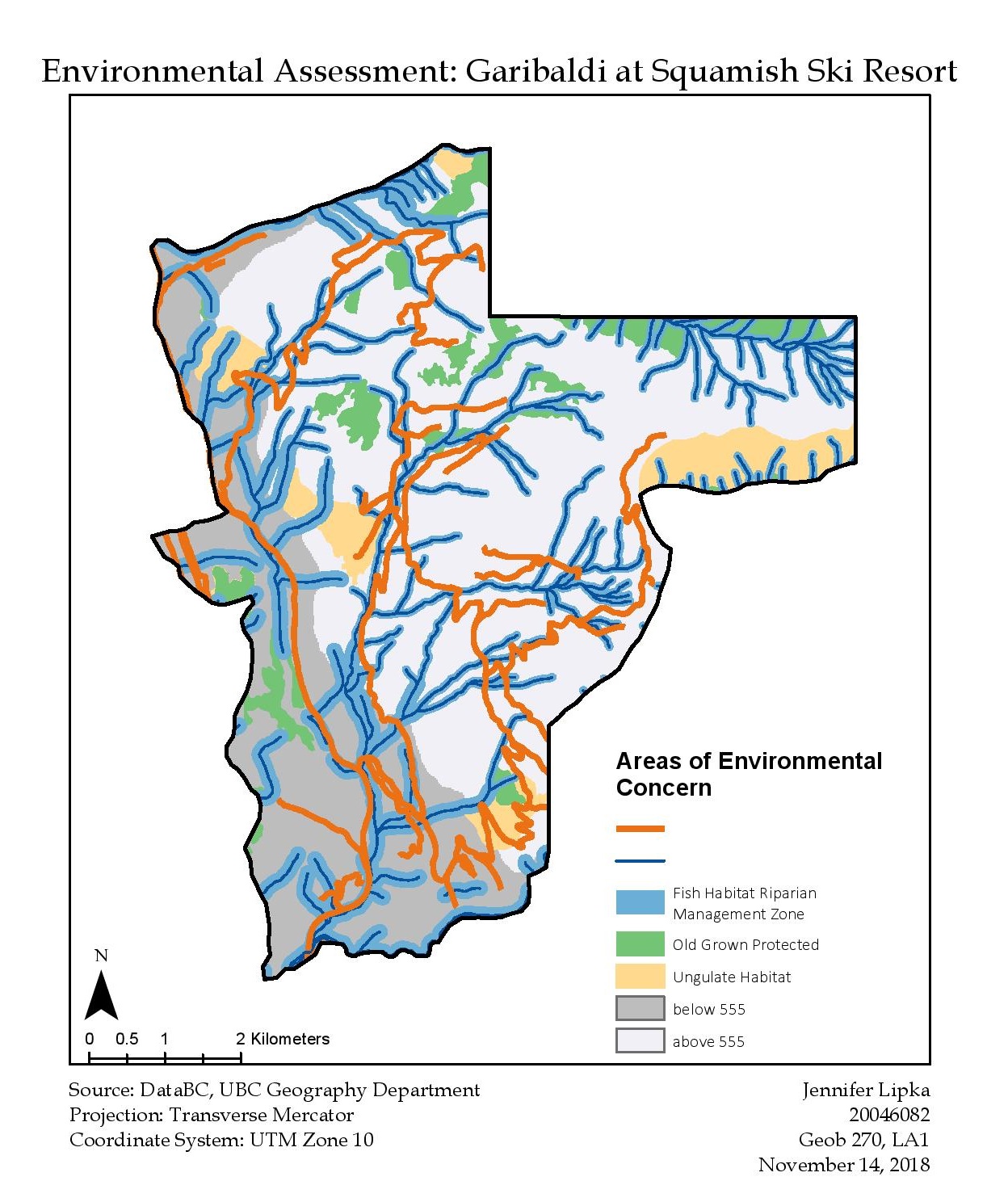 The assessment has been completed using data collected from DataBC. The assessment has been analyzed with ArcGIS software. The resort should not be developed on OGMA, UWR or FHRZ which are sensitive ecological areas for wildlife. Furthermore, it needs to be near a road and above 555 m. There is also slope and aspect for each ski run to consider as well. 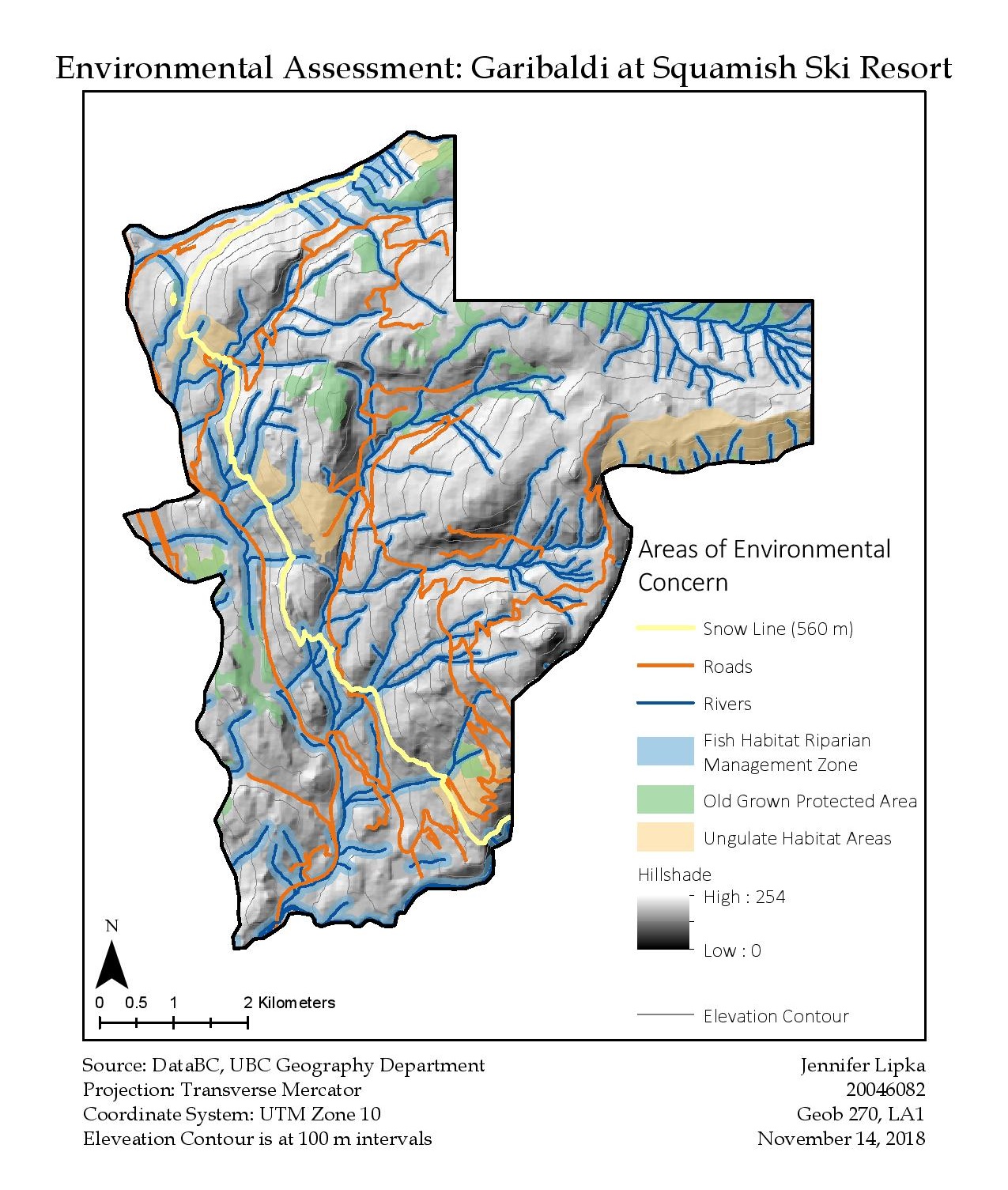 A possible source of error is in the chosen areas of environmental concern to analyze. It is possible that other sensitive areas are missing from this analysis such as red listed ecosystems. Multiple interacting threats of climate change, habitat loss and habitat fragmentation already threaten rare alpine and subalpine ecosystems (Sato et al., 2014). There is limited research which investigates these sensitive and important ecological areas (Sato et al., 2014). Further research is required on the environmental impacts of resorts in alpine areas to correctly identify which areas to analyze.

A 1974 report states that ‘climatological considerations rule out reliable skiing on the lower 555 m of vertical’. For alpine regions, possible climate change predictions include: increased mean winter temperatures, increased mixed precipitation during the winter, rising reliable snowlines, increased snow avalanche risk, and an increased length of fall and spring seasons (Jones, 2012). This assessment has found that within the project boundary approximately 30% of the area is below 555 m. This is a significant portion of the project boundary which is unsuitable for the ski resort. A more recent report released in 2012 states that ‘currently the average elevation of reliable snow cover is 1200 m’ (Jones, 2012). This highlights the importance of the overall elevation of the ski resort as the lower elevations will be more vulnerable to climate change impacts.

The developers must be cautious of where the ski resort trails, lifts and other developments are placed as they could negatively impact the forest plants, wildlife and runoff. It appears as though a significant amount of the project boundary is ecologically sensitive. It would therefore be important to avoid developing directly on these areas but also to be careful to mitigate any possible effects that construction, operation and pollution could have on these areas. Regular monitoring would be required. It would be a challenge to develop the area with minimal impacts to the surrounding environment.
In conclusion, the developers would have to seriously consider whether this large project would be worth the cost and effort especially in light of climate change consequences. Not only will the longevity of the project be affected by climate change, once started the resort is not expected to be finished and complete for an additional 20 years. It may be possible that the effects of climate change could be witnessed within this timeline. This analysis has not considered the financial or economic viability of the project. Further research into whether another ski resort, double the size of Whistler Blackcomb, can be supported by the economy.